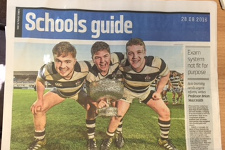 Laurel Hill in Limerick has topped the Sunday Times survey for the third consecutive year sending an average of 93.6% of it's students on to university over the past three years.

Of the top 20 schools this year, 10 are all-girl schools, seven are all-boys and three are mixed. Ghaelcholaisti also continue to perform well with 12 of the 42 gaelcholaisti in the top 100 schools.

Details of the Top 20 schoools regionally as set out in the Sunday Times report can be viewed here. The full list of 400 schools in available in the Sunday Times. Progression data to third level colleges for every secondary school over the last five years can be viewed on Schooldays.ie by visiting individual school pages on Schooldays.ie – 2016 data will be available later in the autumn