Tags: Education And Politics Teachers Parents
Minister for Education and Skills, Joe McHugh T.D., and Minister of State for Higher Education, Mary Mitchell O’Connor T.D., have today (1st November 2018) announced significant changes to the Leaving Certificate examination appeals process from 2019. The changes will mean that, in future, students who appeal the results of the Leaving Certificate will be informed by the State Examinations Commission (SEC) of the outcome of their appeals much earlier than has previously been possible.

In cases where students have applied for course places in Higher Education via the Central Applications Office (CAO), and where their appeal result means they could obtain a higher course preference, they will in most cases now be able to take up that preference in the current academic year, rather than have their offer deferred by a year. The higher education institutions (HEIs) will also strengthen the structured supports provided for those appeal students who begin a higher education course shortly after first year has begun, to ensure that they are not disadvantaged. The HEIs have advised that, in 2019, no First Year Undergraduate academic classes in HEIs will start earlier than the second week of September.

In 2019 the results of the Leaving Certificate appeals will be released to students in the week beginning 16th September, a full three weeks earlier than the normal timeframe (Wednesday 10th October in 2018). This fundamental re-engineering of the appeals process includes a combination of earlier releases of provisional results of the Leaving Certificate and of CAO Round 1 offers to students, bringing forward the process whereby students are able to view their examination scripts in advance of deciding to submit an appeal, having appeals examiners mark scripts on a full-time basis rather than only at evenings and weekends, and a streamlining of the overall appeals logistics. In 2019, provisional results of the Leaving Certificate will be issued to students on Tuesday, 13th August, while CAO Round 1 offers will be issued to students by Friday 16th August.

In the longer term it is anticipated that the planned movement of the examinations marking system from a paper-based to an online model over the next three years could further improve the appeals timeframe.

The changes announced today follow on the judgement in a recent High Court Judicial Review case, taken by a student (Rebecca Carter), who claimed that the current timeframe for processing Leaving Certificate appeals meant that, in the event of a successful appeal of her results which would give her a higher course preference, she would not be able to commence that course in the current academic year, but would instead be required to accept a deferred offer for the following year. In his judgement, Mr. Justice Humphreys stated that the current system is highly unfair to students and cannot be repeated. The judge also ordered the SEC to accelerate completion of the appeal process on behalf of Ms Carter. Following this accelerated completion of the appeal process, Ms Carter was successful in her appeal and was offered a place in Veterinary Medicine in UCD which she took up on 1st October.

While the measures announced today are a recognition by all parties concerned of the need for improvements in the Leaving Certificate Appeals process and subsequent entry to higher education, the Department of Education and Skills and the State Examinations Commission will be appealing certain broad Constitutional and legal issues raised by the judgement and findings relating to aspects of the examinations system. These appeals will, however, in no way affect the Plaintiff in the Judicial Review case, Ms Carter.

Speaking today, Minister McHugh said “My Department has engaged extensively with the State Examinations Commission, the Irish Universities Association and the Technological Higher Education Association on this matter over the last number of weeks. Together we have been considering the outcome of the judgement and how best to help our students in the coming years.

“The State Examinations Commission is making significant changes to its appeals process as part of this. Of course, there will be challenges in its implementation and this will require support and assistance from schools and examination correctors to ensure it can be done. I am confident that these changes, together with the measures being introduced by the Higher Education Institutions, will significantly improve the position for students who appeal their results from next year onwards.”

Minister Mitchell O’Connor added “To help support students who are appealing Leaving Certificate results, the IUA and THEA have agreed that no First Year Undergraduate academic classes will begin prior to the second week in September in 2019. This will minimise the class time lost by students who are offered a higher preference CAO offer.

“As well as this, higher education institutions will offer improved supports for students who begin, or change courses, after the start of first year orientation, including academic supports where needed. This will ensure that students are given the best opportunity in their course.” 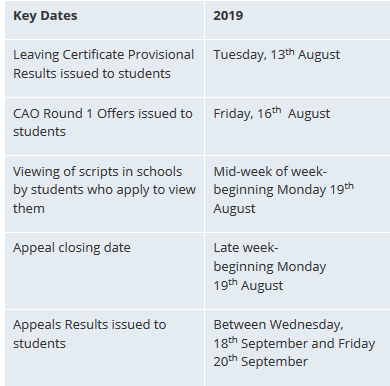